I’ve been quite busy both with work and my own walking/writing project recently, and felt like I needed a little bit of a break from the routine, so I decided to make use of Taiwan’s great rail network and head down to Miaoli to do a spot of very easy walking.

Time: 1½-2 hours – it took me an hour and fifty minutes but I did have a (totally unnecessary) coffee stop.

Difficulty (regular Taiwan hiker): 1/10 – getting to the trail is the hardest part (if you live in Taipei).

Difficulty (new Taiwan hiker): 2/10 – some steps and a little bit of ascent, the walk from the station could seem like a long way on a hot day.

Water: 0.5L should suffice, and you can pick up extra from the OK Mart along the way.

Shade: shadyish on the trail, the trees are pretty young so they don’t give full coverage. However the walk from the train station to the trail head is exposed.

Enjoyment: the views over Miaoli’s coast were pretty special for me since it’s something I rarely get to see.

I alighted at the tiny and unmanned Tanwen Station, and from the station bridge I got my first sight of my destination. (Look for the thing which looks like a statue on top of the distant hill.)

Tanwen Station (談文站), is an unusual living relic. Opened in 1922 during the period of Japanese rule, the station was one of the stops on the (then) newly opened Coastal Line. It has never been renovated, so aside from minor details, it remains pretty much as it was when it first opened for business. Back then, the Coastal Line was needed to speed up the passage of freight between locations on the west coast, and although you’d never guess it if you visited the station now, Tanwen was once a busy freight hub receiving charcoal from Zaoqiao Township, coal from Nanzhuang, and tiles from Gonggong, before sending it off to be used in various places

Since 2008 there has been no staff at the station and the 12,647 passengers who boarded here in 2020 would have had to tap in with an Easy Card to buy their tickets on the train. 2020 saw a drop in passenger numbers from a high daily average of 101 boarding and alighting in 2017, to the much lower figure of 66 – presumably that can be attributed to Covid-19’s impact on travel.

When I visited, the building looked like it had seen better days, with peeling paintwork and a few signs of rotting wood. It’s also impossible to properly see the front side of the building because it was obscured by the widening of the road which runs alongside the tracks. However the century-old station has been earmarked for some restoration work at some point in the future, so hopefully it will be maintained before too much structural damage occurs. The station is certainly worth preserving. The old-time charm of a little wooden building looking out over a single platform stop and bright green rice fields is a draw for both train buffs and those seeking a sense of nostalgia. It seems that the railways authorities and local government acknowledge the location’s worth, because it is one of the “Five Coastal Line Treasures” (“海五寶”), a group of historic wooden stations in Miaoli and Taichung that were built at or around the same time as the Coastal line first opened. (The others are Xinpu Station, Dashan Station, Rinan Station and Zhuifen Station.)

Leave the station and exit onto the main road. Turn right following a sign towards the land god temple (the sign is only in Chinese and reads “土地公”).

The path follows steps down onto a walkway that runs alongside the tracks for a while. 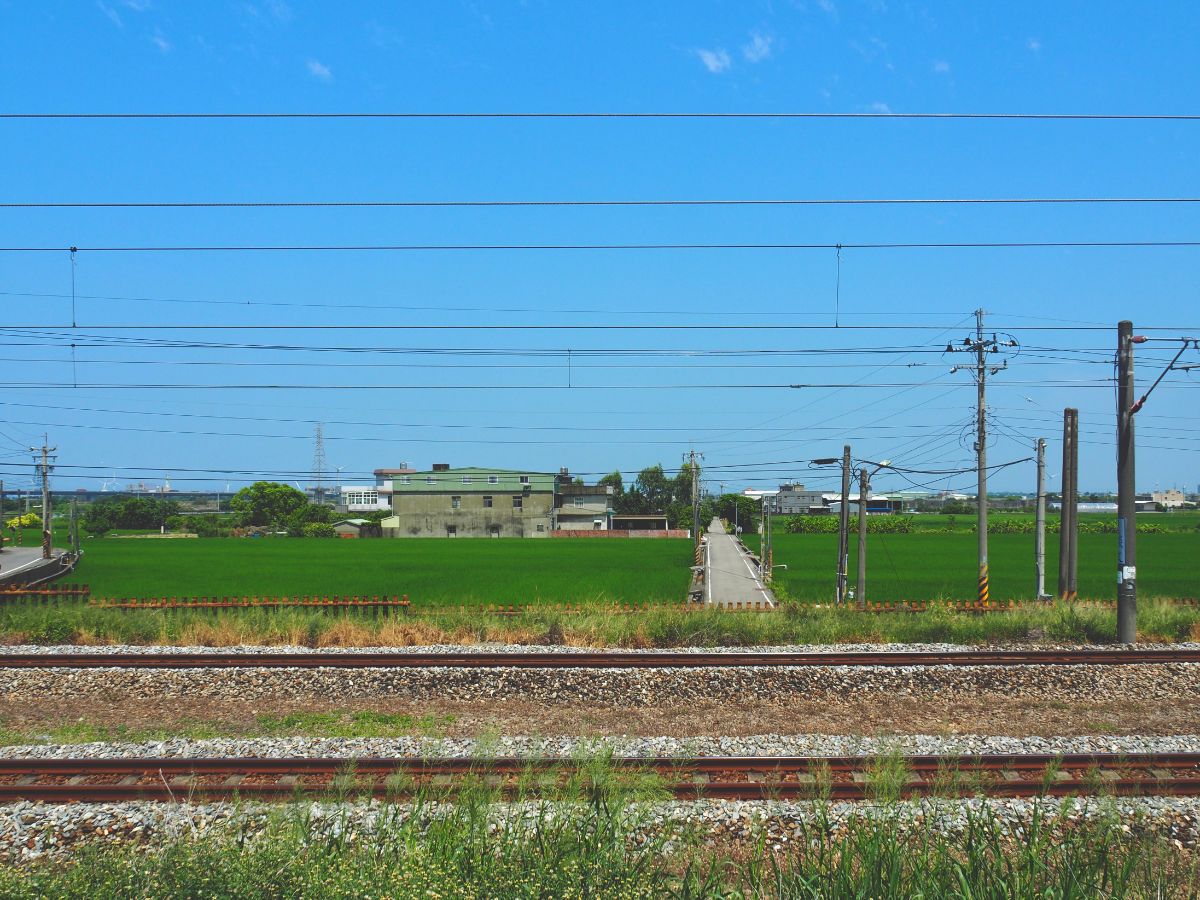 The scenery here is so different to what I’m used to a little further north. The flatness is such a visual shock.

After walking for almost ten minutes the train arrives at a Fude Temple. There are toilets behind it and a table to the side (which I used to make coffee when I returned the same way later).

From the temple take the steps back to the the road and keep heading in the same direction. There’s an OK Mart a little further up next to a police station.

I found myself walking through an unpleasant smoky haze where a farmer was burning off the residue of his crops.

Keep following the road until you reach this turn off on the right. Look out for the brown trail sign reading 鄭漢紀念步道 (Zhenghan Trail).

Follow the road straight up and keep following as it bends left. The sign has been put here to let people know that the trail is up this way.

There’s a couple of minutes of road walking, and when you pass a grave you’ll know that the start of the proper trail is near.

The path starts at a curve in the road and is marked by a sign giving a little information about the location.

This first flight of stairs is about the biggest climb of the whole walk, otherwise the path just undulates, up a little, down a little, it’s really quite gentle.

The first part of the trail is paved and has a thin covering on trees on either side.

There are regular benches, so I imagine it’s a popular exercise spot with local older people and families.

A sign hung from a tree and this hand-written rock mark the high point of Mount Zhenghan – a modest 78m above sea level.

Keep going a little further and the trail becomes a dirt path lined first with bamboo and then with something slightly fluffy-leafed.

Less than an hour after leaving Tanwen Station I arrived at the top memorial stone at the end of the trail. The memorial, and indeed the trail itself is dedicated to the memory of Zheng Han, a young farm worker from the nearby village of Tanwen. One day, whilst working in the fields, he heard the distressed cries of some local children who had got into difficulties whilst playing beside Zhonggang Stream. Zheng Han jumped in to help, and although all of the children were rescued, Zheng Han drowned after getting his clothing caught on something in the rapids. The following year this memorial was established in a spot which commands the best views of the fields and the stream below.

Looking eastish you can see Zhonggang Stream and the wind turbines out on the coast.

Looking north the foreground is mostly small farms surrounded by a vast green sea of rice fields with the buildings of Zhunan visible beyond.

Then looking slightly inland you can see layer upon layer of mountain rising up one on top of the other. I imagine that on a clear day it is even more impressive.

Once I was ready to head down, I returned the same way I’d come all the way back to the station.

How to get to Zhenghan Trail

Google maps address: I started from Tanwen Station, but the walk itself starts a bit further along the road. There’s enough parking for several scooters and a car or two at the trail head.

Public transport: Take a train to Tanwen Station and walk from there. I took the 09:59 Tze-Chiang Limited Express service from Taipei Main Station, transferred at Hsinchu and caught the coastal line train to Tanwen which got me there for around 10:40 at a cost of about $130 one way. Trains heading south from Taipei Main Station are very frequent, but there’s only one train an hour passing through Tanwen, so it’s worth checking your times carefully to avoid having a long wait. To return do the same in reverse.

This is the bit where I come to you cap in hand. If you’ve got all the way down this page, then I can only assume that you’re actually interested in the stuff I write about. If this is the case and you feel inclined to chip in a few dollars for transport and time then I would appreciate it immensely. You can find me on either Ko-fi or Buy Me a Coffee.

One thought on “ZHENGHAN TRAIL (鄭漢紀念步道)”