Kenting National Forest Recreation Area has an interesting history. It is a small part of the much larger Kenting National Park (itself a unique location for being the first national park in Taiwan which incorporates both terrestrial and marine environments). Although it sits 300 metres above sea level today, this whole area would once have been underwater – a fact which is evidenced by the park’s characteristic limestone rocks. Excavations in the area have found evidence of prehistoric cultures going back 4500 years, the early occupants of this land were people who made patterned pottery earthenware to contain their farmed rice, wove textiles, and buried their dead in stone cists. The existence of these prehistoric inhabitants was first documented during Taiwan’s time under Japanese colonial rule, when the Japanese authorities were busy pouring resources into surveying their new acquisition. A little later on and at the behest of the Forestry Department of the Central Research Institute of the Governor’s Office in Taiwan the land was put to good use as an area of botanical research. They established the catchily named Hengchun Forestry Experiment Branch Guizijiao Test Site (does the name flow off the tongue better in Chinese perhaps…恆春林業試驗支所龜子角試驗地), and set about cultivating a vast array of tropical plants – 513 species in total. Different areas were set aside for nurturing Taiwan native species, tropical species, and alpine species, with an eye to seeing which suited wider-scale cultivation and exploitation. After Japan ceded Taiwan, the research centre was maintained by the KMT government, and in 1968 it was turned into a recreation area.

Many of the plants that were brought in during the Japanese era can still be seen today.

Time: a leisurely two hours – there’s more of the park to explore though, so make sure to set aside at least half a day.

Difficulty (regular Taiwan hiker): 1/10 – not at all difficult.

Difficulty (new Taiwan hiker): 2/10 – there are a few steps, but aside from that the heat is likely to present the greatest challenge.

Water: I took a 0.5L refillable bottle and topped it up at the water dispensers behind the visitor centre.

Shade: patchy – I needed an umbrella.

Other: there is an entry fee for visitors to the park (currently NT$150 for adults on weekends, NT$100 on weekdays, other prices listed here).

On the final day of my unexpected tour around some of Taiwan’s forest parks we visited Kenting National Forest Recreational Area. The morning was spent learning to climb trees, and then in the afternoon we took a walk around the park. (Un)fortunately I was enjoying myself too much and didn’t take the kind of detailed photos that I usually do, but the park is pretty easy to navigate so it’s not an issue.

Make sure you get your entrance tickets from the booth by the entry gate before heading into the park.

There’s a map just inside the gates where you can orientate yourself with where to go. The first place we were headed to was the Visitor Centre, and to get there you can either take the most direct route along the road, take the slightly less direct route through the trees on the right, or start on the road then take a much more wobbly route on the left.

We took the route through the trees on the right. Our guide pointed out the roots of strangler figs growing through and over the rocks, and identified the beautifully frilly pink and white flowers as belonging to the barringtonia asiatica trees that lined the trail.

When we visited (late October 2020), the Visitor Centre was undergoing renovation work, and the staff had decamped to some temporary shipping container offices on the lawn in front of it. I’m not sure what the centre offers when it’s open, but it’s worth noting that there are toilets and water dispensers at the back.

We turned left past the Visitor Centre and onto the lawn behind it. This is where groups can receive instruction in how to climb trees like a tree surgeon.

After tree climbing and lunch on the lawn we continued along the main trail, passing the aquatic garden on the left.

The next destination of the afternoon was the Looking Glass Tree. To get there we took a left turn, then a right turn towards the cactus house.

From the cactus house we continued on to the Looking Glass Tree. Contrary to what I originally assumed, this is not a name given to this specific tree, instead it is a common name used to describe this particular species of mangrove (heritiera littoralis). The buttress roots on this specimen are magnificent, great twisty blades firmly gripping the earth – the tallest of which rises as high up as my chest.

The roots are a necessary adaptation for those trees that grow in the intertidal zone (this one may be growing far away from the waters, but you’re more likely to find them closer to the coast). Another adaptation are the buoyant fruits, shake them and you can hear a seed rattling around inside the tough outer case. These float when dropped into water, drifting across the ocean to populate the tidal regions throughout Southeast Asia, tropical Africa and the Indian Subcontinent.

From the looking glass tree we took a right and headed back towards the main central track. The track turned right in front of a semi abandoned looking block, and soon after that we turned left, onto the Fairy Cave Trail (this is labeled as ‘Trail C’ on the maps), starting to climb uphill. Just before the track becomes steps, one of the people in the group spotted this pair of sika deer, a mother and her fawn feasting on the leaves of a banana palm. We were lucky to see them, not least because they’re more likely to visit the park as night draws in and the visitors leave, but also because the wild population of sika deer in Taiwan was eradicated by human activity in 1969, and they can only be seen now as a result of a careful process of breeding the captive populations, reintroduction and conservation. 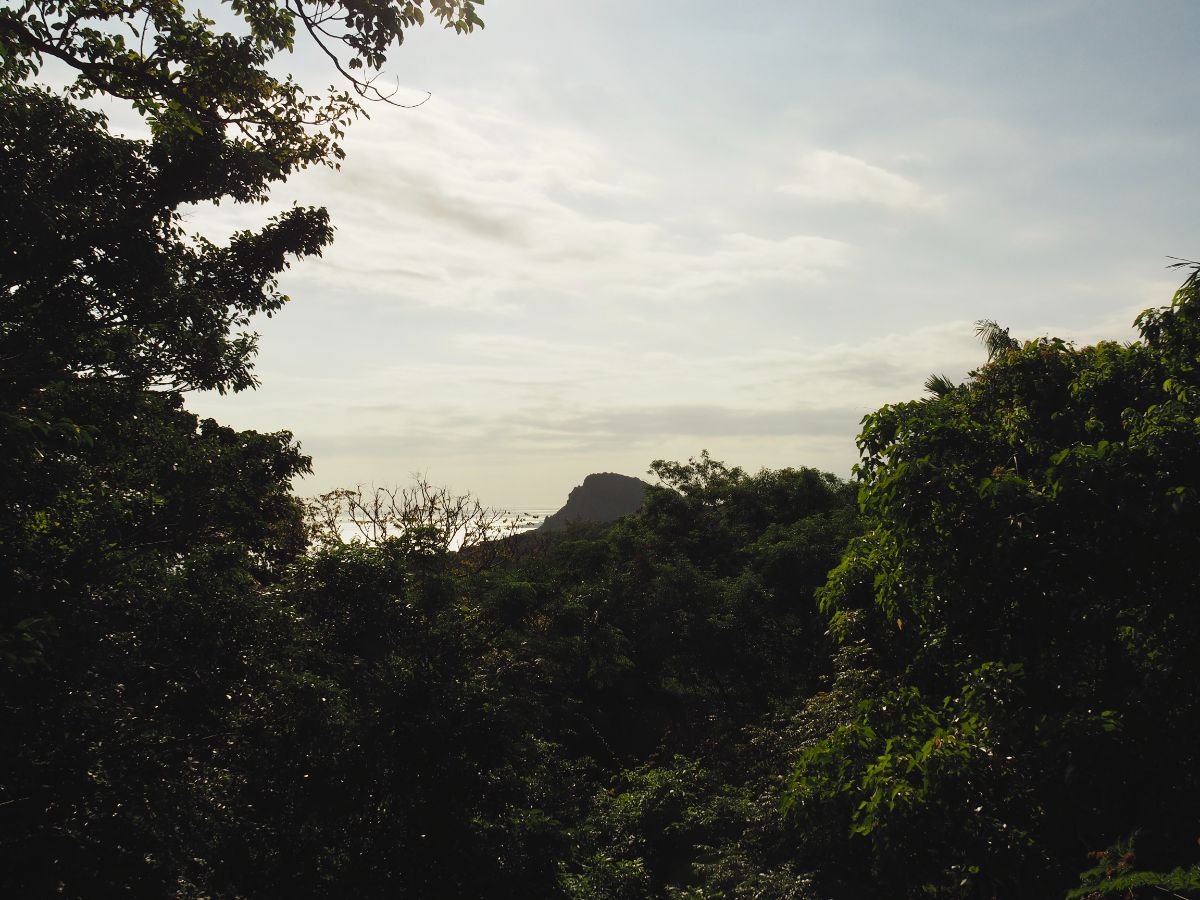 The steps climbed to a point which overlooks a spit of land sticking out into the ocean, apparently it’s known for resembling a rhino, but from this angle I think it looks more like a wild boar. These things are all subjective anyway, the Taiwanese love to slap a tenuous label on all sorts of natural rock formations.

The path is very clear and easy to follow the whole way.

Pass the spur trail for the toilets on your right and keep going straight. (Unless of course you need the toilet, there are no more deeper into the park.) Whilst we were waiting for some members of the group to do their business a Formosan rock macaque clambered through the branches above our heads.

Beyond here we left the Fairy Cave Trail and made our way along the long and looping Coral Reef Trail (labeled as being ‘Trail E’ on the maps).

The heat somewhat saps your energy, but aside from that you’ll find that the trails around the park are pretty easy – our youngest member had no difficulty keeping up.

I really enjoyed the warm quality of the afternoon light filtering in through the canopy.

We had six volunteer guides joining us on the walk. They pointed out different geological and botanical features along the way, and with so many of them it often felt like you had a personal guide.

Perhaps the most striking feature of the park is its spectacular geological foundations. The land here is made up of the limestone remains of ancient coral reef that has slowly, oh so slowly, risen from the seabed to form an otherworldly landscape of craggy cliffs and secret caves. Just be careful not to brush against the rock as you make your way through some of the tighter sections, its rough edges can deliver quite a bite.

The trail winds through coral canyons, at times so narrow that just one or two people could walk abreast…

…at other times wide enough for a small party. It really is an other worldly landscape.

Huge hornet nest, at least I assume it has to be a hornet because I don’t know who else would need such big spaces for their eggs.

The hanging limbs of strangler figs are another special feature of the landscape – here it’s as if a whole forest has grown from the one tree. (This is actually a possibility. When left to their own devices a single fig can spread over a pretty wide area.)

As we were walking through one of the flatter sections, one of the volunteer guides mentioned that Ang Lee’s production team had come here to scout locations prior to filming The Life of Pi – in the end they chose somewhere easier to access.

The afternoon sun shone through the trees at an ever lower angle, making the afternoon air feel all syrupy and slow.

Before I knew it, we had completed a loop and were back at the entrance to the enticingly named Fairy Cave. The limestone structure is 137m long and full of intricate stalactites and stalagmites.

If you’re a tad claustrophobic (as I am in caves) and hesitant about going in, I’d say you probably don’t need to worry. The cave is high-ceilinged and airy, and you never feel hemmed in or like you can’t move freely.

There are several formations which have been given names like Buddha’s Ear, Stone Waterfall, Lotus Lamp, most of which (unusually) do indeed resemble the item they are named after.

The cave had only recently reopened after some renovation work, it looks like perhaps some new gentle lighting was installed, and perhaps the path was also redone.

This is actually one of two caves within the park – unfortunately we didn’t have time to check out the other (Silver Dragon Cave).

The caves even house a few interesting critters – both hermit crabs and and bats call these walls home. I’d love to know how the crabs evolved to live here, it seems like a slightly unusual crab habitat.

We took a right out of the far end of the cave (it is a one-way system), and walked past Seaview Tower onto Seaview Boulevard (‘Trail D’ on the maps).

Before long we took another right trail onto some steps which led through a greenhouse and deposited us more or less back in front of the visitor centre.

How to get to Kenting National Forest Recreation Area

This is the bit where I come to you cap in hand. If you’ve got all the way down this page, then I can only assume that you’re actually interested in the stuff I write about. If this is the case and you feel inclined to chip in a few dollars for transport and time then I would appreciate it immensely. You can find me on either Ko-fi or Buy Me a Coffee.