Time: about 2.5 hours without stops, but it took us about 4 hours to complete with snack breaks, chats with mountain friends about where to go and a stop at the falls. We also went with a novice hiker which slowed the pace.

Difficulty (new Taiwan hiker): 7/10 the mid section between Xingguang Road and the next road we found ourselves on was not easy, many slippery stones, some paths restricted due to storm damage. Also the lack of easy-to-read maps or signage made this harder.

Shade: some shade, my umbrella was used equally as shade from the sun and as a walking stick.

Enjoyment: This was a fun challenge but this wasn’t my favourite waterfall.

The F712 bus and driving yourself will put you in about the same place, (although the GPS location given at the bottom of this post is for the entrance to the trail so start from the third picture). Just down from the bus stop there should be lots of parked cars right about lamppost number 44, (it’s actually the entrance to the waterfall, so it’s possible to skip the hike and just see the falls but water is even more pleasant when it’s reached after a walk). From here head downhill a little.

Continue downhill until you reach this junction with a sign pointing you to the start of the Paozilun trail. Head up and ignore the first set of steps leading off the road, they go to the cemetery.

You’ll find a (not very useful) map at the trailhead.

The thing which annoys me is the lack of scale of any indication of time requirements. The previous signposts suggests that Paozilun trail is just under 1km but if that’s to scale, (the Paozilun part of the trail is just the yellow line with the green dotted line on top), then the whole round trip would seem to be under 3Km. Anyway, I hope this blog can offer a little clarity on some of the vageries encountered whilst hiking in Taiwan.

As we climbed up we met workers fixing the path, they said they’d been contracted to repair it after it sustained damage during a typhoon.

The first of many slightly dubious sign posts, two arrows at a junction where there are three paths. This time the path goes around to the right.

This one has the correct number of arrows, you’ll turn left at this junction, following signs towards 新光路 (Xingguang Road).

The path leads you through farmed bamboo groves before starting to climb through farm land.

Go past the farm house.

Right and up at the shelter, the path up to the road now is pretty clear.

When we reached the road we spent a while resting at the pavilion and asked everyone who passed whether they knew the best way to get to the waterfall, it turned out that everyone was visiting for the first time. From here on the signage becomes quite vague.

A little way further the road take the offshoot to the left which seems to go up towards someone’s house.

The path veers off on the right before you reach the house and you pass a small farm building. There were literally no signs here, perhaps the landowners aren’t so keen on people walking through their farms.

Just beyond the last farm building we met some people who were familiar enough with the area to point is in the right direction. Their advice was that as long as we just kept turning left at each intersection of paths we’d get to where we wanted to go. I think this took us on a path not marked on the original map but it certainly worked. 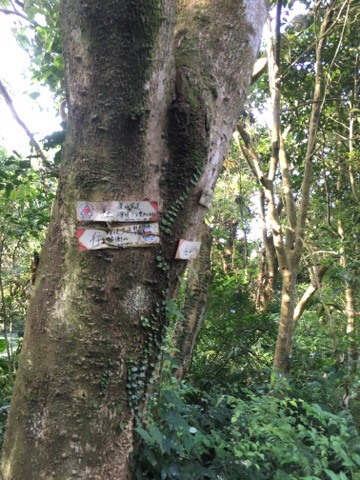 We continued straight, I think it was here that we joined the Houshanyue trail for a short way, the trail to the right is the longer portion of that trail. It looks like it’d be a fun one to do at a later date.

For this part of the trail you’re walking midway up around the inside, shaded part of a valley, it is full of ferns, moss, lichen and loads of these huge plants which attach to trees and fan out like umbrellas to form a dense green canopy.

The second sign post is as a junction where the arrow could be pointing in either direction.

We continued following the advice to keep left.

Arriving at this electricity pylon was a sign that we were on the right path, we’d been told that we would walk past it a little way after turning. Just beyond the pilot the path looks as if it might split but actually the path on the left just goes to the pylon, it’s not really a path.

This was the only real scramble of the walk but with pretty slippery surfaces underfoot we went carefully.

The rope could have done with being a bit longer as the steep part went further than it reached.

There were signs of weather damage to this section of the path, parts had been eroded and other parts had suffered from trees falling across it.

Coming out of the wood the path bends to the right, head towards the water tank and the small farm.

We met a farming couple burning last season’s crop plants to return the nutrients to the soil. They told us we’d come a really difficult route and pointed us in the right direction to continue.

As you leave the farmland the path heads to the left through trees again.

Coming out of the bottom of the trees follow the path right towards some houses.

Skirt around the edge of the buildings and you’ll eventually come to a downward slope where you can see a bridge leading towards the road. Cross the bridge and start heading downwards. You’ll pass another trail map which seems to bear little resemblance to the first one. Looking at this map I’m not even sure if we were on the Paozilun trail.

From here it is down all the way. To where you started.

When you’ve walked all the way back down you can choose to do a brief detour to check out Silong falls. There’s a small, unmarked trail leading into the trees right next to the electricity post marked with number 44. The route up to the falls is very straightforward, just follow the path and/or other people.

It was already pretty crowded when we arrived so we didn’t spend too much time there.

Compared to some of the other waterfalls I’ve been to in Taiwan this one seemed to have been tamed for humans, there was a concrete semi circle to stand on, sandbags forming a path to the falls and a wooden crate for people to sit on.

People had even rigged up a shower cubicle fed by a pipe which had been led down from the top of the falls.

From here we returned to our car and headed into Shenkeng to get some stinky tofu because apparently that’s a must if you visit the area.

How to get to Silong Waterfall

Goop maps address: google maps address you can find the trail head here, there is roadside parking in the area.

Public transport: there is an infrequent bus service run by Xin Bus Company to the entrance of the waterfall trail, (see the sign below – the last bus goes at 3pm). The F712 route stops here and can be caught from Shenkeng Market or Shenkeng Elementary School. The downside however is that it seems to be unavailable at weekends and the service stops really early in the day.

A  better alternative might be to take bus 819 from Muzha MRT station and get off at A Rou Yang bus stop, (on Section 3, Wenshan Road). The service runs from 6am to 10pm, every 20 minutes on weekdays and every 30 minutes on weekends. You’ll stop on the wrong side of the road so you’ll need to get off and walk to the T-junction where you can cross over and head up. The Google Streetview of the the junction looks like this:

From here it’s a 20 minute walk up the road, don’t turn off until you get to the brown sign that points right to Paozilun Trail, (it’s the second one, the first one will take you to a golf club).

My new words learnt on this hike were: